After a little bit of experimentation, I found that my first changes would be the use of icospheres rather than uv. This produces a triangular mesh which breaks up the hard straight edges.

Using the sculpt tools I then went about making the edges of the craft appear melted and twisted.

Internally, I want to create the impression of a highly symmetrical system to make it clear that the structure is not natural. This is where the hexagonal blocks come in and the patterning.

The scene was modelled in blender 2.55, and exported and loaded into 2.49 to for rendering. So some of the shapes are a little too smooth. namely the inner silvered surface appears to be rounded and on top of,  rather than originating from the outer shell.

All materials set in this render are simply for testing, as an attempt to produce something less clean and perfect looking (though it still does look a little too perfect)

The surface of the planet for this render has been given a glossy coat, it needs alot of work in my oppinion, as if it was to be like glass i would have it more jagged. 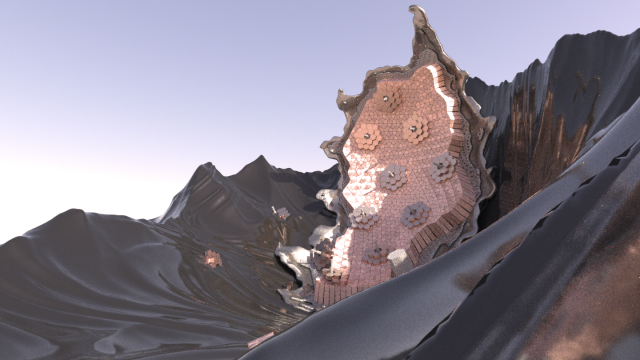 This entry was posted in Blender. Bookmark the permalink.